Alliance Française de Bristol et Bath would like to express its sympathy to St-Etienne-du-Rouvray,

this small town in Normandy where the priest Jacques Hamel was murdered on 26th July. All over France today, religious services have taken place in his memory bringing together people of all faiths or with no religious faith.
As you may know France is what we call un état laïque ( a secular state) since the law in 1905 which separated l'église et l'état ( the church and the state). Every religious faith is allowed and respected but only outside any public building, like schools, hospitals, government buildings etc... as the state is neutral.
Jasques Hamel was murdered on Ste Anne's day. As you may know the French calendar has a saint for every day of the year and Christians celebrate the saint day of every member of the family, so if someone is called Françoise, on 9th March people will say to her: Bonne fête Françoise! and may give her a present.

For Christians, Sainte Anne is particularly important as she was the mother of the Virgin Mary. She is  Hannah for the Muslims, meaning kind and sympathetic.
She is the patronne of clercs, matrones and widows.
In France the first sanctuary dedicated to her, in the 11th century, was the ancient cathedral of Apt in le département du Vaucluse.


Sainte Anne has become the patron saint of Brittany, so many pilgrimages take place every year, the most important is Sainte Anne d'Auray.
Auray is an attractive harbour in South Brittany in le département du Morbihan, a nice place to visit.


If you would like to find out more about French culture or French places to visit or learn French whatever your level, our French classes will resume in September, for more info...

Posted by Alliance Française de Bristol at 17:14 No comments:

It was a time trial ( une course contre la montre) which Christopher Froome won. But do you know Megève?


It is in the Alps in Haute Savoie, it became popular in the early 1920 ies thanks to the Rothschild family who wanted a posh ski resort (une station de ski ) in France rather than in Switzerland. La baronne de Rothschild had some smart hotels built, these soon attracted aristocrats, kings like Albert 1er de Belgique and queens. It is now known internationaly ( a une renommée internationale).
It hosts numerous festivals and competitions in Winter such as polo playing on snow or snow golf competitions,  and in Summer, a jazz festival called Jazz Contest, also a classical music festival, Les Estivales de Megève and plenty more.
There are numerous outdoor activities as well as ski-ing, you can do some tree climbing circuits ( de l' accrobranche), gliding ( du parapente), follow a fitness trail ( un parcours santé) some Summer sledging ( de la luge d'été) and so much more.


So if you have no plans yet for this Summer or next Winter and you feel like mixing with VIPs, you know where to go!!!
But first of all, you'll need to improve your French, so do look at all the language courses and activities which we offer, for more info...


Posted by Alliance Française de Bristol at 17:39 No comments:

At Alliance Française de Bristol et Bath, we have all been appalled by the tragedy which took place in Nice on 14th July. We want to offer our most sincere condolences to all the people who have lost  dear ones and we very much hope that all the injured will recover soon. We want to show our solidarity with all the people who were on La Promenade des Anglais last Thursday.
We also would like to share with you some nice memories of Nice as Martine went to Nice with her Tuesday evening French class a few years ago.
They stayed in a small hotel near La Promenade des Anglais, had lunch at one of the numerous cafés on La Promenade, it was bathing in sunshine although it was in January. 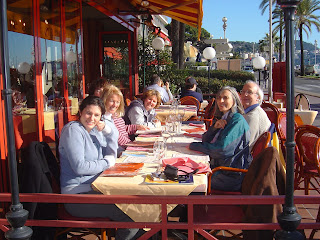 They walked up to le Château which is a park on a hill with a wonderful view over la Baie des Anges on one side and the old port on the other, very close to le vieux-Nice. Le Vieux-Nice is the main tourist area with lots of delightful cafés and restaurants, Martine and her students had an evening meal there and tasted the delicious beignets de fleurs de courgettes ( savoury dough made with courgette flowers).


They went to the famous Nice market and bought and ate la socca which is like a pancake made with flour and chickpeas.
There are numerous museums in Nice and they spent some time at le musée Matisse at the top of Cimiez, one of the old areas of Nice. On the way they walked past l'hôtel Regina which was built in 1986 and was inaugurated by Queen Victoria who loved Nice. It had 400 bedrooms all eventually converted into flats where Matisse lived for a time.
The stay was short but full of exciting discoveries and friendly encounters, we must not forget that Nice is about that too.
We are in Bristol and Bath this Summer so you can contact us anytime, for more info...http://afbristol.org.uk/
Posted by Alliance Française de Bristol at 17:12 No comments:

What would you do if you won the lottery?

Who among us hasn't imagined what they would do with the winnings (la cagnotte)?

This unusual book is perfect for the seaside (la plage).

It's the story of Jocelyne, who is married with a man called Jocelyn. She is more or less happy. She runs a haberdashery shop (une mercerie) in Arras. She also writes a blog about haberdashery, called Ten Gold Fingers (Dix Doigts d'Or). Her two best friends, twins (les jumelles) run a hairdressing salon (un salon de coiffure) and one day, they convince Jocelyne to play the lottery (le Loto). 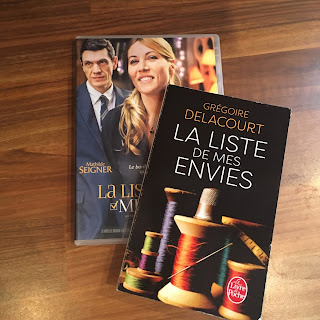 It would spoil the book to tell you what happens next, but we'll tell you this; it's probably not what you are expecting!

Students in Audrey's class (one of our teachers) have studied the book this year, and then they all watched the film.

If you would like to join our classes, don't forget to look on our website for our September French courses and French events this Autumn, for more info...

Did you know what Les perles du bac are?

Une perle when it is not a pearl is a really stupid mistake. Every year des perles are collected from exam papers like the baccalauréat or le bac. They are published in newspapers and on the Internet. Here are a few found in L'Internaute:
Pour moi, Anatole France, c'était un arrêt de bus. ( For me, Anatole France - famous writer- was a bus stop- you may have noticed in France that we like giving names of famous people to streets, metro stations, bus stops, schools etc....) 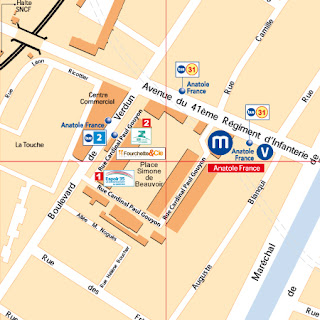 Un homme heureux et libre, ça serait d'avoir fini les épreuves du bac. ( A happy and free man, this would be to have finished the bac exams- this was the answer to this deeply philosophical question: what does it mean to be a  happy and free man? )
De nombreux conflits ont éclaté dans le Sahara afin de récupérer tout le sable qui est présent ( many conflicts in the Sahara are taking place in order to collect all the sand which is there)
De toute façon, Madame Bovary n'a jamais rien compris aux mecs. ( In any case Madame Bovary has never understood anything about blokes.)
Les Américains sont les premiers touristes à avoir profité des plages de Normandie ( The Americans are the first tourists to have enjoyed the Normandy beaches)
Le triangle est un rectangle avec un côté en moins. ( A triangle is a rectangle with one less corner)

If you are interested in  French culture or in the French language, and it is interesting, I can assure you! Just go to our website, for more info...
Posted by Alliance Française de Bristol at 17:30 No comments: