Here is the second part of the 2013 Christmas sketch, written by Robin in Martine's Tuesday morning French class.
The title is, if you remember from last week: L'affaire du triangle des Bermudes..... why such a title?
Here is part of the explanation which you'll be able to read in French below: four in Martine's French group left last Summer, either because of family reasons or work, Robin, with his usual sense of humour, imagines how these students have disappeared!!

Here she is, reading the sketch with Robin, her postman: 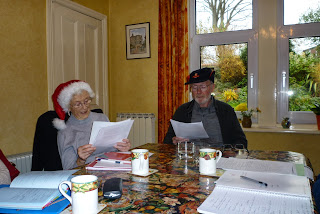 Our French lessons resume the week of 6th January, if you wish to join one of the regular French tuition groups, we still have some places left, for more info...


Posted by Alliance Française de Bristol at 17:06 No comments:

Robin, student in Martine's French class on Tuesday mornings, has shown his imagination, sense of humour and good standard of French once again. Here is the first part of the Christmas story with our now famous Mère Noël ( Mother Christmas) and le facteur ( the postman). Robin, who plays the part of le facteur, has been to one of Alliance Française workshop on French cheeses and as you will read, remembers their names well!

Why the title: L'affaire du triangle des Bermudes? All will be revealed next week!
Here is a photo of Mère Noël, played by Maureen and le facteur, played by Robin. 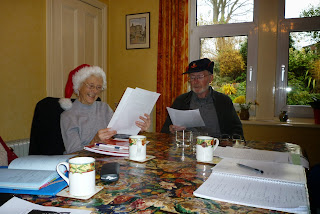 Recently in Audrey's class, students have read Clic-Clac, a short story by Anna Gavalda. It's the story of Olivier, who spends a good part of his life fantasising about Sarah Briot. Will he or will he not muster the courage to ask her out?
The name of the story is a popular word to refer to a sofa bed: Clic clac sounds like the noise when you open it!
Find out what our students say about it: 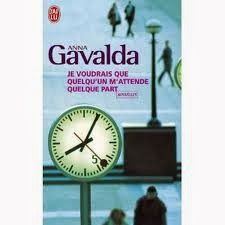 So if you're learning French, why not treat yourself for Christmas?


Posted by Alliance Française de Bristol at 15:18 No comments:

From Marseille to Toulouse

Isabelle's French tuition class has been working on the imperative ( l'impératif) , giving instructions ( donner des instructions), orders ( des ordres) or advice ( des conseils).
Here is what Justin wrote from being an almost complete beginner not that long ago:

There are flights to Toulouse right through the year from Bristol , don't miss the opportunity to visit this enchanting city, but what about learning French first with Alliance Française here in Bristol or in Bath. For more info...
Posted by Alliance Française de Bristol at 12:57 No comments:

Marius & Fanny by Marcel Pagnol have been adapted by Daniel Auteuil, whom you may remember, played in Jean de Florette & Manon des sources.
Marius is the first film of a trilogy ( une trilogie). The story takes place in ( se déroule à ) Marseille, with many scenes in a bar: le bar de la Marine owned by César, played by ( joué par ) Daniel Auteuil, where he works with his son, Marius, Raphael Personnaz. Marius dreams to go and discover the world on one of the big ships ( les navires) which leave the port regularly. Fanny, played by Victoire Belezy, is a childhood friend ( une amie d'enfance) of Marius. They are both in love  with each other ( ils sont amoureux). But Marius is torn ( déchiré) between his longing for the ocean and his love: which will he choose? The film ends with the choice ( le choix), the next film Fanny, carries on with the story which will not divulged not to spoil it. César the last film of the trilogy should be out soon.
There are some lovely scenes of Marseille, beautiful colours and costumes and good actors: a pleasure to watch.

Both Marius & Fanny are on at the Watershed in Bristol, for more info...

Posted by Alliance Française de Bristol at 16:48 No comments: