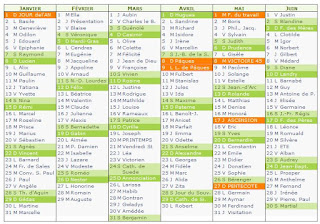 For once, the calendar date and the weather have coincided. If you look carefully on the calendar above, you will see:
mardi 20 mars: printemps

Les nuits sont claires et on peut voir Venus et Jupiter: nights are clear and we can see Venus and Jupiter
il fait un temps splendide, un temps magnifique: the weather is gorgeous
Profitons-en! Let's make the most of it!

Why not come and learn more vocabulary in our French classes, for more info...

Posted by Alliance Française de Bristol at 17:31 No comments:

Did you know that this week is La semaine de la francophonie?

What is la francophonie? Le Haut comité de la langue française in 1977 said:
"C'est une sorte d'école de la fraternité humaine." We should add it is for people speaking French all over the world, either as a mother tongue or as an administrative language or as a second language.
In 1962, the president of Senegal, Léopold Sédar Senghor, suggested the idea of " Un Commonwealth à la française."
The idea of La Francophonie was born.
Now, there are annual celebrations of La Francophonie in March and La journée internationale de la Francophonie is on 20th March with events all over the world.
There was a celebration on Trafalgar Square last Friday with the theme: "Le français, j'adore!". Musicians from the Lebanon, Haïti, Quebec, Senegal, Tunisia, Switzerland, Belgium and France performed.
TV5 is having a campaign:" J'aime les mots." For more info...

On this occasion, L'Alliance Française de Bristol has invited Thierry Viennois, who gives regular talks to Alliances Françaises and Cercles Français on: France, Angleterre: Que de différences!
The talk is completely booked up and our French teachers are delighted that so many students have shown so much interest!
If you would like to come to some of our talks or events, go to our website, for more info...
Posted by Alliance Française de Bristol at 16:21 No comments:

Thierry Viennois, French lecturer for the French circles in the UK is coming to Bath on Saturday, March 17th to talk and show photos on Grenoble.
Grenoble is situated in the Alps ( les Alpes ) and is near le Massif du Vercors, known for fantastic mountain sceneries and le Massif de la Chartreuse, also known for its liqueurs, la Chartreuse verte, for instance.
Grenoble was famous in the 19th century for its gloves ( ses gants ) which were exported all over the world, now it has developed a very important centre for nuclear research ( centre d'études nucléaires ) and a centre for nanotechnologies ( nanotechnologies ).
The Winter Olympics ( les jeux olympiques d'hiver ) took place in Grenoble in 1968 and of course skiing ( les sports d'hiver ) is very popular, it is easy to fly to Grenoble from the UK in Winter.
Le Tour de France has been through Grenoble several times.
There is a big music festival in April and le festival du court métrage ( short films) in July.
If you prefer just to sit in cafés and look at the world go by, you can go to the second oldest café in France: Le café de La table Ronde.

If you would like to find out more about Grenoble, why not join our French teachers and their students in Bath next Saturday, for more info...

Posted by Alliance Française de Bristol at 15:53 No comments:

Lionel, French sommelier and French teacher is doing a French lesson on French wines with a dégustation!

Lionel is coming to Alliance Française de Bristol next Thursday, he will bring four different Alsace wines ( vins d'Alsace ) and he will teach French while talking about wines!
The title of the evening is:
J'apprends le français tout en dégustant!
Ten students have registered for the course which is the maximum for such a session.
Here is some of the vocabulary he may teach:
Ce vin a du bouquet or the opposite Ce vin est imbuvable! ( undrinkable)
Ce vin est mal bouché or est bouchonné ( this wine has a cork taste )
Il est aigre ( it tastes of vinegar)
Il est vert ( it is too young)
C'est de la piquette ( it has a very low degree of alcohol)
Il a du tanin ( it has a slight taste of wood)
Il a de la longueur en bouche ( the taste stays in your mouth for a while)
And plenty more....
If you would like to find out more and taste some wines, why not enrol for the next session on 3rd May, for more info...
Posted by Alliance Française de Bristol at 10:40 No comments: