A murder in Bristol, the story continues....

Audrey will soon start her next French drama workshops so watch this space! For more info...
Posted by Alliance Française de Bristol at 16:34 No comments:

A murder in Bristol!!!

Audrey asked her students in her Thursday French class to write a story about a murder ( un meurtre) or a premedited murder ( un assassinat) and who did her students choose to kill? Their French teacher!! ( Leur professeur de français!)
Here is one of the stories: 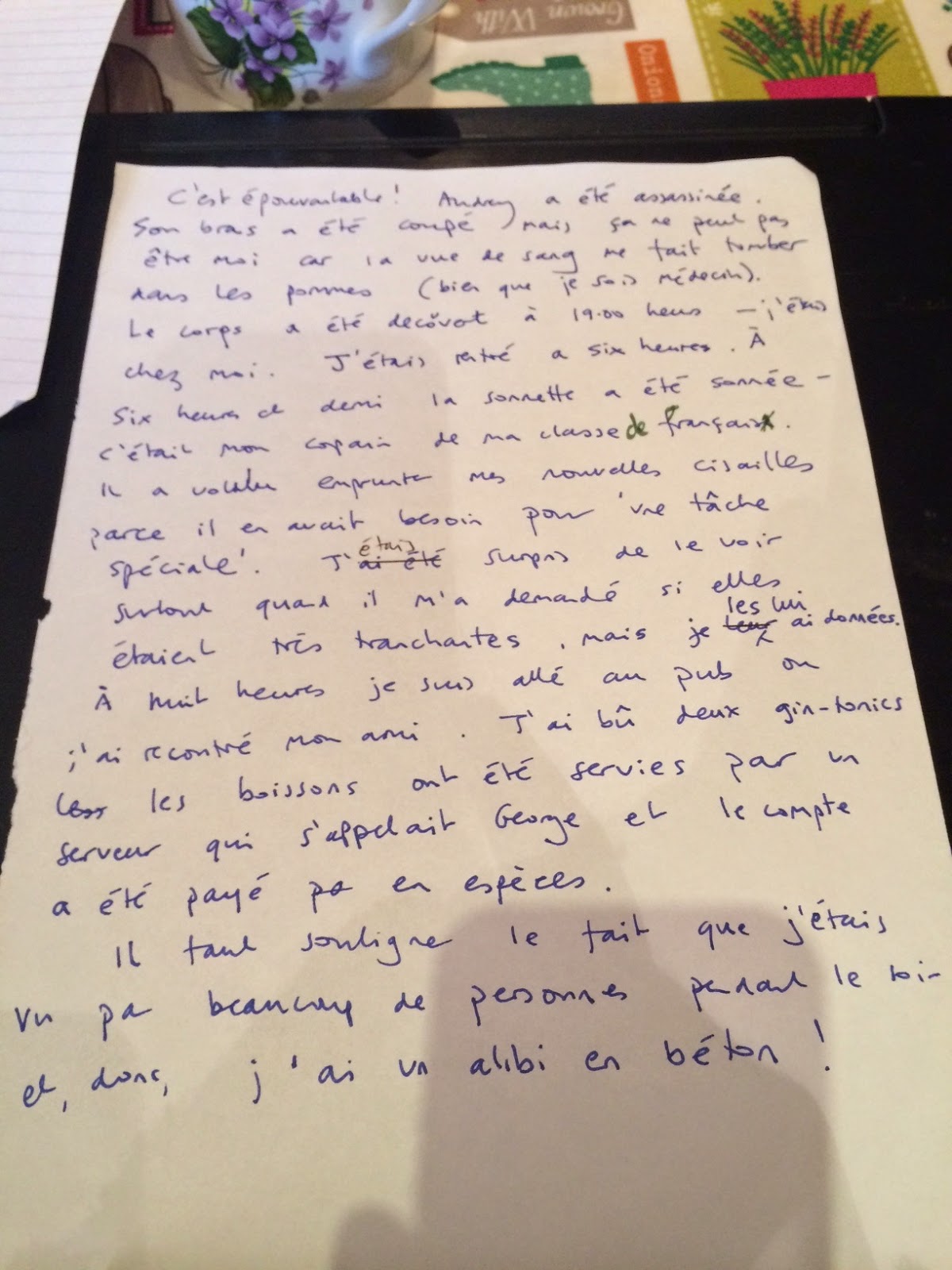 Audrey's body has been found, she has been killed ( tuée ou assassinée), one of her arms has been cut off ( elle a un bras coupé), the student who saw her body fainted ( est tombée dans les pommes) when she saw all this blood ( à la vue du sang). She was at home when the murder happened, a friend from the French class ( un ami du cours de français) called on her to borrow some secators ( pour emprunter des cisailles). He asked if they were sharp ( tranchantes).

After he left, she went to the pub and drank some gins and tonic, she paid the waiter, George with cash. ( elle a payé le garçon en espèces). She was at the pub when the murder took place and she was seen by quite a few people ( plusieurs personnes l'ont vue) so she has a cast iron alibi ( un alibi en béton).

I can assure you that Audrey is safe and sound ( Audrey est bien en  vie), I have just spoken to her ( je viens de lui parler).

Would you like to write crazy stories too? Or simply start learning French? For more info...
Posted by Alliance Française de Bristol at 18:35 No comments:

Did you know that the next cineclub in Bristol will be next Sunday?

The film will be La Cérémonie, a drama ( une comédie dramatique) by Claude Chabrol with Isabelle Huppert and Sandrine Bonnaire.
Sophie, Sandrine Bonnaire, works as a maid ( une bonne) for a well do to, cultivated family ( une famille aisée et cultivée). They live in an isolated house ( une maison isolée) in Brittany ( en Bretagne). Sophie performs her tasks perfectly but is very quiet and withdrawn ( silencieuse et fermée) which baffles ( déconcerte) her employers ( ses employeurs). Sophie becomes friendly ( devient amie) with Jeanne, Isabelle Huppert, the postmistress ( la postière) in the village. Jeanne is full of life ( exubérante), quite the opposite of Sophie. They soon discover that they have some things in common from their past......... 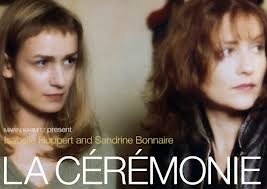 We thought Spring had arrived!

We had some lovely weather lately and we did think Spring ( le printemps) was here.
So, Catherine, a student in Audrey's French tuition group, got busy in her garden ( elle a fait du jardinage), took some cuttings ( des boutures), she chose comfrey or knitbone ( la consoude) because of its long roots ( ses racines) which are good for potassium in the soil ( la terre), in the Summer, hens ( les poules) like sheltering in its shade ( s'abriter sous son ombre). She also cut the roots of a plant with which marshmallow ( la guimauve) used to be made. It is good for sore throat ( le mal de gorge) or tummy upsets ( pour les problèmes d'intestin). Catherine's husband who had a sore throat was cured ( a été guéri) after he took some.

Did you know about La fête des agrumes à Menton?

With her Monday evening French class, Isabelle, has been looking at words related to a specific month of the year. One of her students introduced La fête des agrumes ( citrus fruits) or La fête du citron ( lemon) in Menton.
The festival starts on 14th February and finishes on 4th March. There are a host of activities during these two weeks, such as:
Exposition des motifs d'agrumes, an exhibition of artistic representations with citrus fruits, mainly giant sculptures made with over 15 tonnes of fruit, this year the theme is China.

Le salon de l'artisanat, a craft exhibition where you can discover all the products made with lemons, oranges or olive oil.

And plenty more.... You can just visit the site, for more info...