Did you know that this week is La semaine de la Francophonie?

What is la Francophonie/ francophonie?
The word appeared for the first time (pour la première fois) around 1880 when a French geographer used it to refer to people speaking French and to countries where French was spoken.
There are two words:
La francophonie, with a small f ( un f minuscule), for French speaking people.
La Francophonie, with a big F ( un f majuscule), to talk about the organisation linking all the countries where French is spoken.
In 2014, there were 274 million people speaking French on 5 continents. 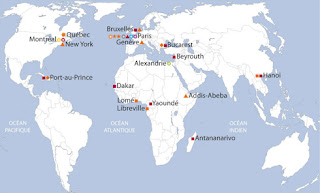 TV5 Monde and all the branches of Alliance Française spread French language and culture all over the world.
Every year in March, there is la semaine de la Francophonie, this year it is between the 12th and 20th March where there are a host of French events all over the world. There is a common thread for all the countries which is Dis-moi dix mots ( tell me 10 words), 10 words are chosen every year with the aim of making us all discover the variety and wealth of the French language according to the different francophone countries.
Here are the words for this year: 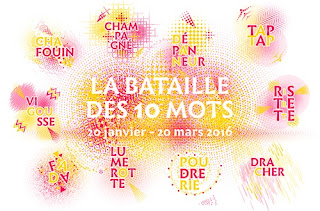 Have fun understanding them! Talking of fun, you can have a really good time joining the French drama classes starting soon in Bristol. For more info...
Posted by Alliance Française de Bristol at 15:56