Do you know about the game of quilles ( skittles)?

The old game of skittles ( le jeu de quilles) is still played on the square of small villages in France. The nine skittles are placed in the centre of the square rather than at the end of an alley.

There are some variations in the shape of the skittles and the rules but the game goes back centuries and was played in villages all over France, rules appeared in the 19th century and La Fédération des sports de quilles was created in 1957.
There are quite a few expressions with the word quille:
Arriver comme un chien dans un jeu de quilles: to arrive unannounced and not very welcomed
Prendre son sac et ses quilles: to leave very quickly
Jouer des quilles: to run away as quilles mean jambes (legs) in slang
C'est la quille: means the end of the military service which, of course, does not exist any more but the expression is also used for people coming out of prison.
Some of the French teachers of Alliance Française de Bristol had a game of skittles at the end of June, not in France but in England so it was an English version  of the game. All the same, it was great fun! 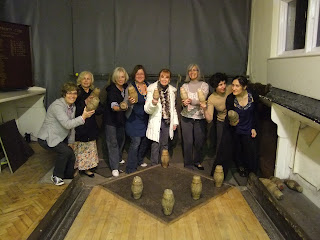